A new chapter for YALDEI

YALDEI to begin a new chapter

Both institutions are particularly pleased that the property will continue to serve the educational needs of the Montreal community and the sale is a significant step in strengthening the financial and pedagogical foundation of both institutions. The new, fully updated and modernized JPPS will now be firmly rooted in the Bialik building and is slated to move in the Spring of 2016.

The Donald Berman YALDEI Developmental Centre is realizing one of its long-term goals with the purchase of this Van Horne Avenue property. The acquisition is groundbreaking news as it signals a new chapter in history for the special needs community of Montreal. The new property will serve as a home for the numerous programs and therapies YALDEI offers children with developmental delays, as well as those with behavioural or learning challenges. The extra space will enable the continued growth of this Intensive Early Intervention Program. 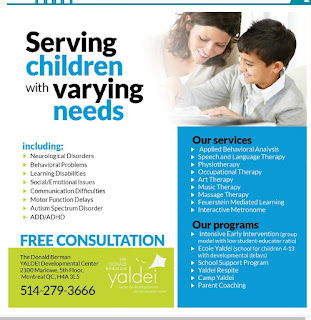 École YALDEI, a school for special needs students, offers a low staff to child ratio, complementary therapeutic services and unique environment, all under one roof. “École YALDEI alone has seen constant growth and in the last year the number of children has doubled,” said Risa Plotnick, Director of School and Rehabilitation Service. “There is a huge wait list of children that have developmental delays or other obstacles. We’re working on filling the void of taking children off that wait list and expect to see another 50 percent increase in the number of students in the coming year.”

The Donald Berman YALDEI Developmental Centre community is grateful to the Board’s new Building Sub-committee headed by Martin Schwartz and Michael Rosenberg. Also acknowledged for their hard work is the Board of Directors who, led by Jack Dym, have been planning the strategic vision of YALDEI for many years” said Menachem Leifer, YALDEI Founder and Executive Director.

“There’s no child that cannot learn,” shared Plotnick. “There’s no child that has so many challenges that we cannot help them. We work in partnership with the private and public sector in order to enhance the potential of every child. Every child should have the opportunity to learn. Challenge accepted.”
For information about YALDEI, visit www.yaldei.org, or contact Lillian Vennor, lillianv@yaldei.org, 514-279-3666, poste 245.

City of Laval is becoming autism-friendly

The announcement coincided with the United Nations’ International Day of Persons with Disabilities, which was themed “Inclusion matters: access and empowerment for people of all abilities” this year.

"The goal of this project is to provide autistic people and their family with better access to life in their community, by promoting awareness, acceptance and appreciation of autism," explained Seiun Thomas Henderson, Director of Giant Steps School.

“As a Laval resident and the father of an autistic child, I am proud that my city recognizes the challenges of people affected by this condition, particularly since the city is serving as a pioneer to make Laval the first municipality in Canada that is accessible to everyone and all-inclusive," said Nicholas Katalifos. Katalifos sits as chairman on the Board of Directors at Giant Steps. The private, bilingual school is dedicated to children with autism spectrum disorder (ASD), while its resource centre supports the ASD community through a wide range of services.

Training for Laval’s firefighters and police is already underway. Public transit workers will have their turn in 2016. Moreover, the city will create a voluntary registry of households with autistic individuals; it will be integrated into the 911 service’s database. It is estimated there are 4,000 people living with autsim in Laval.

“It’s crucial that [first responders] recognize certain behaviour as autistic instead of threatening or disrespectful,” explained Remrov Vormer, an autistic pencil artist working closely with Giant Steps. “Another thing that many of us find scary and very difficult is public transportation. It would be good if personnel could recognize this so that they could help out whenever is needed.”

The city also has several long-term projects in the works related to housing, employment, sports, arts and even entertainment. And Cineplex’s Colossus Laval has plans to introduce sensory-friendly movie screenings. These screenings are presented with the lights up and the sound down.

City officials and the school’s representatives are confident their joint efforts will improve community life for people with autism, while simultaneously raising awareness and acceptance of individuals on the spectrum.

Katalifos said Giant Steps is eager to work with all partners who wish to develop similar initiatives. “This is a long-term project. It’s not going to happen overnight,” he admitted. “We need to work in collaboration with many different organizations, be it municipal or out in the community.”

Demers is proud to be taking the lead: “I invite other municipalities to benefit from our experience and the steps we’ve taken to better serve the population.”

Valentina Basilicata is a freelance journalist, communications specialist and emcee. She is also the proud mom of two boisterous, loveable boys.


About Giant Steps School
Giant Steps School / École À Pas de Géant is the only private education institution in Québec whose training mission is exclusively aimed at 4-21-year-old girls and boys with autism spectrum disorders. Set up to meet the needs of both English- and French-speaking children, the school is recognized by many parties concerned in the educational and health networks.

The Resource and Training Centre of Giant Steps School offers many quality services to professionals, educators and families faced with issues related to autism in Québec and elsewhere.

About Laval
With a population of over 420,000, Laval is the third largest city in Québec. It is also one of the cities with the highest demographic growth. Laval is both a city and an administrative region. Following its Repensons Laval / Rethinking Laval operation, Ville de Laval developed a strategic vision (Urban in Nature – Laval 2035) in 2015.

Last weekend, General Hospital and The Young and The Restless fans of Montreal had the opportunity to meet some of their most beloved soap stars, who were in town for an action-packed weekend extravaganza.


CH Elegant Entertainment, spearheaded by Gina Lesage and Shpresa Nela, organized a fun-filled weekend that gave GH and Y & R fans the chance to live the dream of meeting these stars. CH Elegant hosts events such as meet and greets with guest stars from popular TV shows, concerts, and cocktails, for the benefit of non-profit organizations.

This star-studded event was dedicated to raising funds for The Giant Steps Foundation. Giant Steps (GS) is a private school in the public interest in Montreal that is the only autism specific school to offer academic and social inclusion programs in the province of Quebec. Lesage recently learnt about the GS Foundation, and immediately knew that it would be the beneficiary of the next CH Elegant Entertainment event.

This was the first time that CH Elegant brought in five stars at the same time: Ryan Carnes, Laura Wright, and William DeVry from GH, and Sean Carrigan and Christian LeBlanc from Y & R. Their agenda was jam-packed, from bowling, karaoke, and mingling with their fans.

We had the opportunity to meet Ryan Carnes, Sean Carrigan, and Christian LeBlanc at an intimate event at Hachem in Galeries Laval on Saturday morning. This art event paired Carnes, Carrigan, and LeBlanc with students with autism, from Giant Steps, to create paintings that would later be auctioned to the highest bidder at the stars' evening event.

Being soap fans ourselves, my colleague and I were a tad concerned that we'd fumble all over ourselves upon meeting them, but quite the opposite occurred. These three were warm, engaging, kind, and delightfully generous and compassionate with their painting buddies.
Christian LeBlanc is originally from Louisiana, and was feeling very at home on his first visit to Montreal. He is in the process of learning French, and was eager to try it out with us. (He speaks beautifully, by the way!) Leblanc was quite familiar with autism as his nephew is autistic, and was eager to raise funds for the cause and to help better the lives of people living with autism and their families. He and I chatted  about his relationship with his nephew, the struggles and the triumphs. He believes that his knowledge of acting enhances his interactions with his nephew.

Ryan Carnes was also working diligently with his buddy. We had a few minutes to chat after their painting was complete. "We all learn differently," he shared, in discussing how important it is to look beyond labels and adapt to each individual's learning needs. He brought up A Brave Heart: The Lizzie Velasques Story, which is a documentary about the life of a woman who discovered she was called 'the ugliest woman in the world' while searching for music on YouTube, and that he would like to get involved in projects of this nature.

Our friend Ellis Nassef-Goldsmith was painting with Sean Carrigan. I had the opportunity to tell Carrigan about Ellis' history with drawing, and the extraordinary work that his father Jason does translating Ellis' drawing conversations into beautiful glass painted art with The Big Blue Hug. Their painting was fabulous. Take a look!

We also had the opportunity to meet William DeVry and Laura Wright on Sunday at the bowling event. DeVry is a native Quebecer, and long time Habs fan, and is always happy to be back on home turf. And Laura Wright was as radiant in person as she is on the small screen.

Here's a little tidbit for the GH fans out there. When I congratulated Laura on the outstanding performances she has been nailing on GH, and for her work on the 'Jason' story, she responded, "I was so honoured that they gave me the opportunity to break the story." I agree that the writers chose well and 'Carly' certainly gave that breaking moment justice.

And when I asked DeVry if 'Julian Jerome' will be staying out of the mob...well, he just chuckled...giving no clues away to this curious reporter...so that question remains wide open for the time being!


Thanks to CH Elegant Entertainment and Ryan, William, Laura, Christian and Sean for
getting behind autism, raising awareness and much needed funds. Come back again soon!

To see more photos, visit our Facebook page at www.facebook.com/inspirationsnews 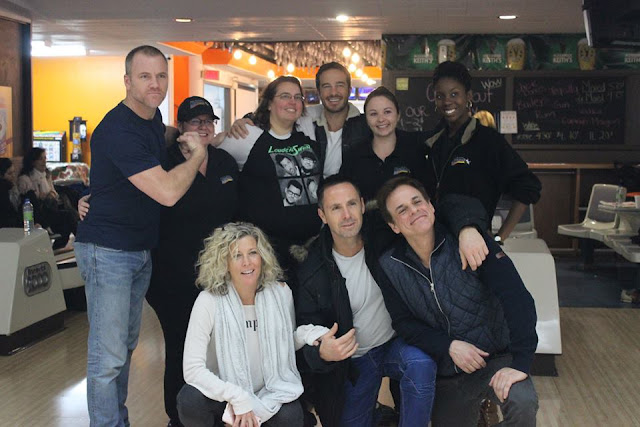