Intouchables: A must see at Théâtre du Rideau Vert 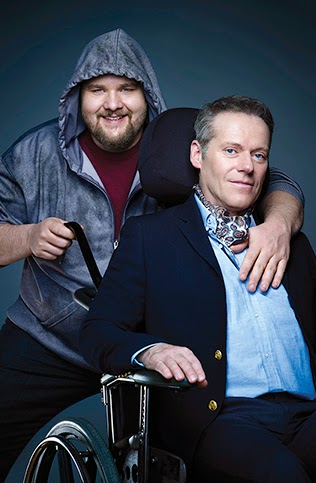 Intouchables: A must see at Théâtre du Rideau Vert

By Wendy Singer and Joëlle Grundman

The film Intouchables is one of the most touching French movies that I have seen. I was excited to hear that Théâtre du Rideau Vert was adapting this film for the stage, and would be playing in Montreal from March 24 to April 26, and again in May at two other venues.

Starring Antoine Bertrand and Luc Guérin, and directed by René Richard Cyr,
Intouchables tells the true story of Philippe Pozzo di Borgo, a widowed billionaire who became a quadripligic after a paragliding accident, who hires the most unlikely of caregivers.

The play was masterfully adapted from the film by Emmanuel Reichenbach, who integrates Quebec culture at every turn, including changing his ex-con caregiver’s name from Driss to Louis, and inserting references understood only in our province, from popular locations to explicit curse words. These references endear the audience from the beginning and has them rolling with laughter throughout the play.

Moving from funny to touching, this French-language play shares the budding friendship of Philippe and Louis. This duo, who come from complete ends of the social scale, learn from one another, and in the end, find happiness in a place once inhabited by darkness and dead ends. 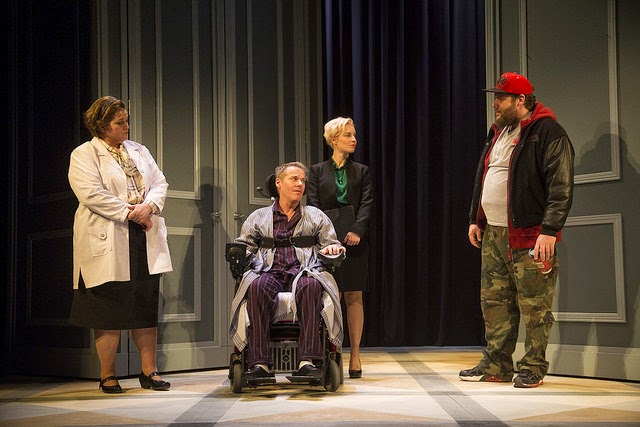 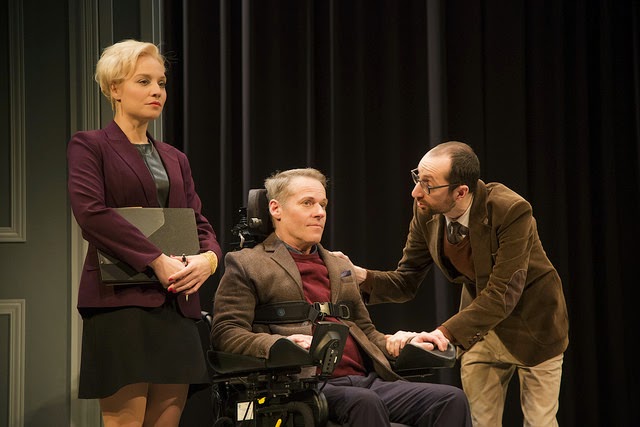 Philippe is endeared to Louis because of his humour, his ability to poke fun of his paralysis, and to cut to the chase, seeing far beyond the wheelchair, looking right at the person he is. Time and again, Louis’ clumsiness with words, lack of filter, and undeniable charm, bring Philippe out of his shell and back into life, giving him vision to see that he can still live, and attain his dreams. The feeling is mutual, as we see Louis transform from ex-con to a caring man with a purpose.

Luc Guérin plays an outstanding Philippe from a motorized wheelchair, while Antoine Bertrand’s delightful Louis does not break from his antics, gags, and affection, making for a beautiful piece of theatre.

Intouchables is playing at Théâtre du Rideau Vert until April 26, Salle Pierre-Mercure from May 6 to 10, and L’étoile Banque Nationale from May 20 to 24. For information visit http://www.rideauvert.qc.ca.
Posted by Wendy at 8:58 AM 1 comment: