Picture this: walking across an unbalanced dock and joining 19 other paddlers in an unstable boat, aiming to paddle in sync, water splashing on your face, trying to hear your coach’s bellowed calls over the many distractions around you… all with limited to no vision.

This sounds impossible. But it’s quite the opposite for Team Caravela.

In fact, that’s what they have been doing every week on the Lachine Canal since the start of the dragon boat season in May. Under the expert leadership of Coach Ira Lax and Captains Annie Gouveia and Josh Simmonds, the team, sponsored by the MAB-Mackay Foundation in Montreal, Quebec, strives to perfect their technique and stamina in preparation for various competitions.
Team Caravela participants are not new to the sport. As the first dragon boat team in Quebec to include blind and partially-sighted paddlers, Caravela has garnered quite respectable rankings in its four years as a community team. They most recently paddled in the McAuslan Cup (June 17) where they beat sighted teams in their division (gleefully referred to as ‘sighties’), attaining their personal best time of 55 seconds for a 200m race. Sighted paddler sub Angela Lowson remarks: “The thing that struck me is how competitive these paddlers are.” Indeed, they are not here just for fun. The Caravela paddlers are intent on improving their performance and timings.
Captain Simmonds salutes his team for being results-oriented and keen on incorporating feedback.

Born with retinitis pigmentosa, Simmonds has more vision than most paddlers on the team, and readily admits it takes a lot of courage to be blind and paddle on an unstable boat. “I couldn’t do it,” he shares. Having limited vision by day and night blindness after dusk may challenge some, but not Simmonds, who is a member of the 22Dragons Senior Mixed and Senior Men’s teams, as well as the prestigious Club Crew.

Being blind from birth has also never stopped Ioana Gandrabur who boasts four music degrees, speaks six languages, and is an internationally renowned guitarist. She enjoys being part of something bigger than herself, and notes how there are few options in the athletic world for those visually impaired. “Limited vision can be a benefit in races as we’re not affected by mind games, like ‘they’re gaining on us!’ like the other teams are,” she quipped.

Coach Lax leads the team with quiet authority, making no allowances from what he expects from them. In his second year coaching Caravela, he led the movement for them to don the same jerseys as his other high performing teams, Verdun Impact and Force. The intention was to not have any distinction between Verdun paddlers. Simmonds concurred with this decision: “You are not a ‘vision impaired paddler’. You are a paddler who happens to be vision impaired.”

Lax encourages his team members to have a ‘vision’. “They’re here for a purpose - to see themselves as athletes –  a new reality for many,” he states.

Competing in a technical sport such as dragon boating takes a lot of commitment and grit. The team paddles in all types of weather, and contends with challenges such as wobbly docks and carelessly strewn-about life vests. A sport that is both physically and mentally demanding, Team Caravela uses minor adaptations such as auditory cues and being physically positioned by the coach rather than visual demonstrations.

Caravela is gearing up for the Montreal Challenge dragon boat competition to take place at the Olympic Basin on July 8 and 9, 2017. Come out and cheer them on! As noted by Lax: “If they can do something as bizarre as dragon boating, they can do anything.” 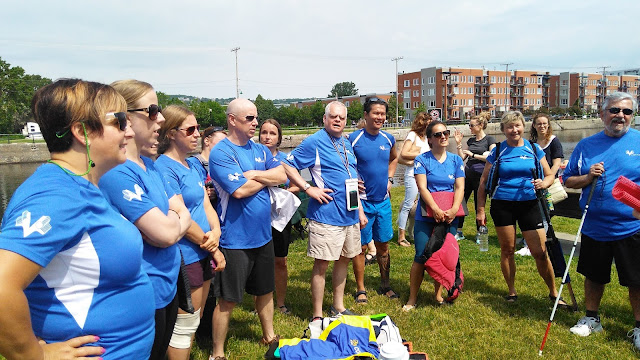