The Autism Monologues
debuts...
and the Montreal premiere of
Awkward Hug
at the St-Ambroise Montreal Fringe Festival 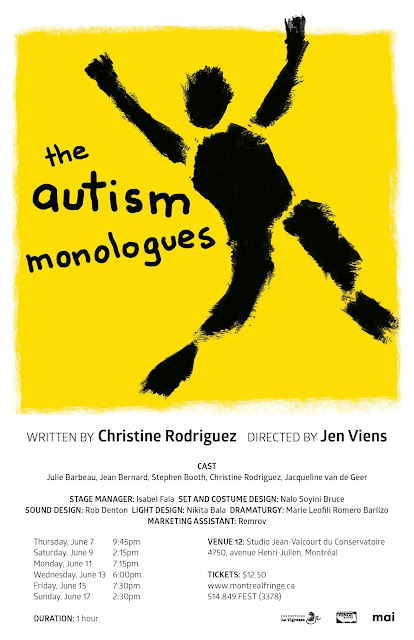 That is the fundamental message in The Autism Monologues, a play written by Christine Rodriguez and directed by Jen Viens, playing now as part of the St-Ambroise Festival Fringe de Montréal. A follow-up to Rodriguez’s award-winning play Dreaming in Autism, which is an auto-biographical account of her own experience having a son with mild autism, this play widens the lens and brings audiences into the lives of more than two dozen characters, each impacted by the disorder in some way.

“Autism is diverse,” says Rodriguez in a press release. “There is a spectrum of symptoms that range from mild to severe. There is far more than one story to tell. Through The Autism Monologues, I’m able to present autism from many different points of view.”

The play consists of a series of short vignettes portraying the multiple faces of autism. From a parent dealing with the diagnosis and struggling to access services, to a therapist detailing the difficulties in her work, to a police officer describing the takedown of an erratic four-year-old with autism at a press conference, every scenario shows a real and raw look at the disorder. Distinctly Montreal, the play makes several references to local spots, government agencies, and reminds the audience on several occasions that it understands the nuances of the city and province in which we live.

The cast of five actors do a wonderful job in taking the audience on the journey with them. Most commendable are the portrayals of individuals with autism – from a nonverbal child, to a likable teen with Asperger’s syndrome lamenting the fact that he believes the disorder is responsible for his restricted iPad use – this play does a fantastic job in demonstrating how autism affects every one differently.

On its opening night, the audience was visibly taken with many of the scenes, with some nodding in agreement at the anguish of family members. At one point, an audience member shouted “just show them love!” in response to a scene with a character who did not know how to properly engage with a child with autism. Crying was audible during several dramatic scenes dealing with accidental death and suicide.

This play does not sugarcoat autism and its impact on those living with it, and genuinely demonstrates the ripple effect it has on family members, caregivers and society as a whole. It is powerful, well acted, and relatable to so many.

The Autism Monologues runs until June 17 at Studio Jean-Valcourt au Conservatoire. For information, visit www.theautismmonologues.com and for tickets go to www.montrealfringe.ca.

Don't miss AWKWARD HUG, playing until June 17. With laugh-out-loud humour and heart- breaking honesty, AWKWARD HUG transports us to the discomfort of navigatingadulthood for the rst time. Through masterful storytelling and intimate reflection, Cory explores what constitutes “normal” in our world, and how having two parents with cerebral palsy forces his family outside those margins. In the summer of 2009, writer and performer Cory Thibert was a quiet 19-year-old living in his parents’ basement. He was working as a server to pay his college tuition, spending time with his animal-loving girlfriend, and starting a theatre company with his best friend. When the Ottawa Affordable Housing Unit informs his parents that they have to move out of the only home Cory has ever known, it sets in motion a series of events that uncover the truth about whathas set his family apart, and force Cory to nd hisvoice...with a scream.